Your subscription could not be saved. Please try again.

Thanks for Your Subscription!

Yes, hydroquinone has a family. And like any family, every individual in that family isn’t necessarily “good” or useful. Some of the quinones are great for skin whitening, while others are best for industrial use ONLY.

Quinones are a class of natural and synthetic compounds that have several beneficial effects. Quinones are electron carriers playing a role in photosynthesis. As vitamins, they represent a class of molecules preventing and treating several illnesses such as osteoporosis and cardiovascular diseases. Quinones, by their antioxidant activity, improve general health conditions. Many of the drugs clinically approved or still in clinical trials against cancer are quinone related compounds. Quinones have also toxicological (cytotoxic to melanin/tyrosine/melanocytes) effects through their presence as photo products (hydroquinone) to air pollutants. Quinones are fast redox cycling molecules and have the potential to bind to thiol, amine and hydroxyl groups. 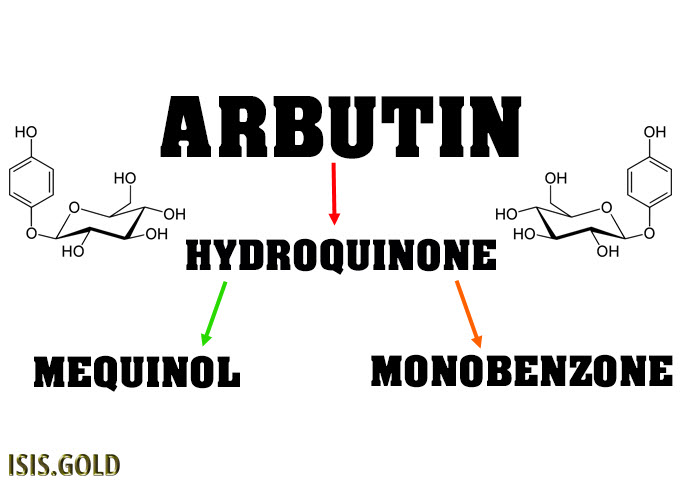 Arbutin gives rise to a few quinones (see photo). You already know hydroquinone is a by-product of arbutin. Hydroquinone can be synthesized by the human body by eating arbutin containing foods (like pears). Once arbutin mixes with stomach acids, arbutin is then converted into “hydroquinone”. Hydroquinone is commonly synthesized from arbutin in a lab to produce hydroquinone powder. The purity of hydroquinone powder dictates the cost. Cosmetic grade hydroquinone powder is the purest (processed to remove all impurities) and is most preferred for skincare products. While industrial grade hydroquinone powder is cheaper, and mostly used for applications involving photography, or in the production of rubber products.
HYDROGEN PEROXIDE PRODUCTION
A large scale industrial application of quinones is for the production of hydrogen peroxide (H2O2). 2-Alkylanthraquinones are hydrogenated to the corresponding hydroquinones (quinizarins), which then transfer H2 to oxygen: dihydroanthraquinone + O2 → anthraquinone + H2O2. In this way, several billion kilograms of H2O2 are produced annually.
BIOCHEMISTRY
Derivatives of quinones are common in biologically active molecules. Some serve as electron acceptors in electron transport chains such as those in photosynthesis (plastoquinone, phylloquinone), and aerobic respiration (ubiquinone). Phylloquinone is also known as Vitamin K1 as it is used by animals to carboxylate certain proteins, which are involved in blood coagulation, bone formation, and other processes. Conversely, the toxicity of paracetamol is due to its metabolism to a quinone imine, which then reacts with liver proteins to cause liver failure.

A natural example of the oxidation of hydroquinone to quinone is in the spray of the Bombardier Beetle. Hydroquinone is reacted with hydrogen peroxide to produce a fiery blast of steam, a strong deterrent in the animal world.

The auto-oxidation of the neurotransmitter dopamine, and its precursor L-Dopa, generates the comparatively stable dopamine quinone. Which inhibits the functioning of dopamine transporter (DAT) and the TH enzyme leading to low mitochondrial ATP production.

MEDICINAL
Natural or synthetic quinones show a biological or pharmacological activity, and some of them show anti-tumoral activity. They embody some claims in herbal medicine. These applications include purgative (sennosides), antimicrobial, antiparasitic (rhein- and saprorthoquinone, atovaquone), anti-tumor (emodin and juglone), inhibition of PGE2 biosynthesis (arnebinone and arnebifuranone) and anti-cardiovascular disease (tanshinone).
Posted in SKIN WHITENING 101.
Share
Share
PreviousEXFOLIATING: WHICH ACIDS ARE SAFE TO USE WHILE PREGNANT?
NextSKIN WHITENERS EXPLAINED: WHICH IS THE STRONGEST?